Shortly after I started experimenting with electronics, I discovered my fascination with LCDs and other displays. For me, these screens are not just about providing a convenient way to display visual feedback. Any green backlit 16×2 display will probably suffice in most situations. It’s more about expanding my collection, and playing around with all the different colors, form factors and display technologies. I love having shelves full of screens, and thinking about possible projects I could embed them in. Perhaps one day I’ll have a use for them all, but for now the pile just keeps growing.

One of the first displays I bought was this 1.3″ 128×64 monochrome white OLED display from Adafruit. I was aware of the cheaper options on eBay and sites like Banggood and AliExpress, but since this was my first try at working with one of these screens, I wanted to make sure that any issues would most likely be caused by my own mistakes, and not related to product quality. 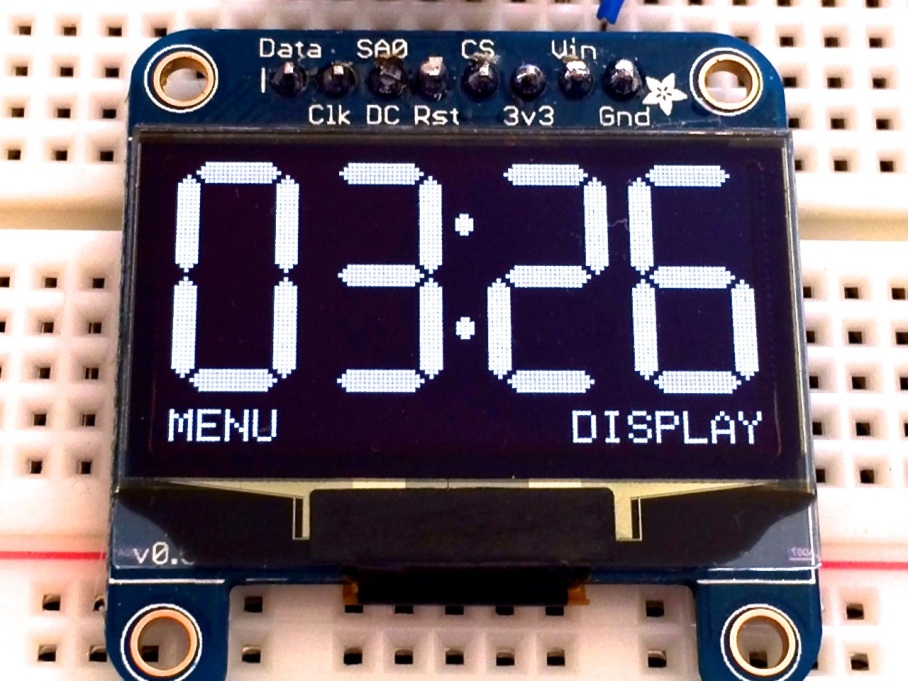 OLED displays are great for projects that require a screen that’s viewable from any angle. Instead of a large backlight, OLED displays have individually lit pixels, which means a blank screen will be completely dark, and won’t leak any light. The lack of a backlight also makes them very thin. 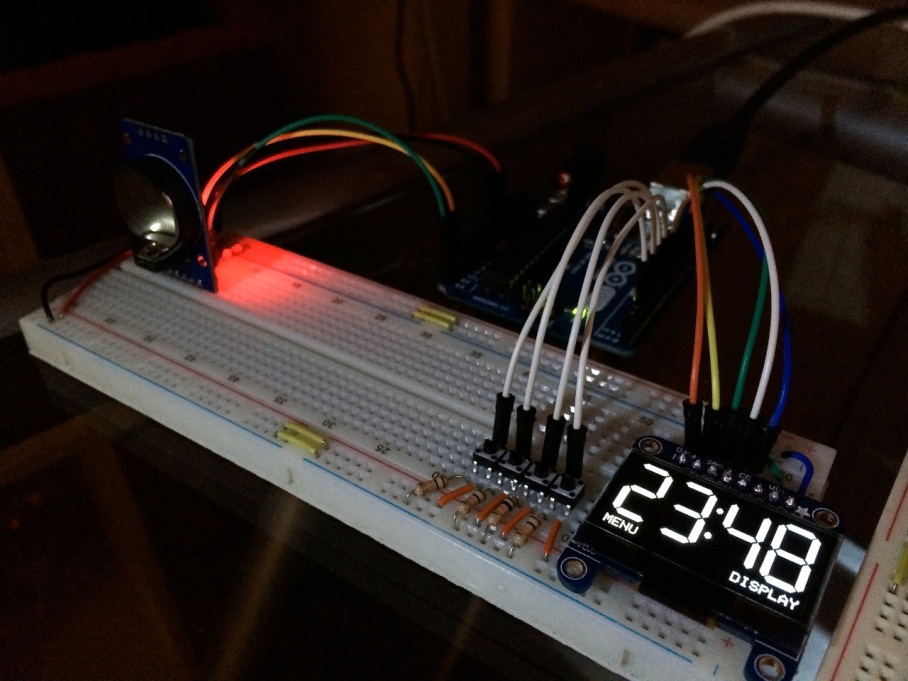 This OLED display is part of my alarm clock project, pictured here with a DS3231 real-time clock module. Since then I’ve added an LM386 audio amplifier and an 8 ohm/0.5 watt speaker. I also have a few FM radio and nRF24L01+ modules lying around that are just begging to be included, but I don’t want to go overboard on features for my first project. More details on that in a later post.

Another display I bought early on is this white/blue 16×2 character LCD. I made sure to pick one with an HD44780 compatible controller IC, which the majority of character displays seem to offer, since they’re the easiest to find readily available Raspberry Pi and Arduino libraries for. It saves a lot of time not having to write your own interface code, although some of these controllers aren’t as compatible as they claim to be, and still require a bit of tweaking. 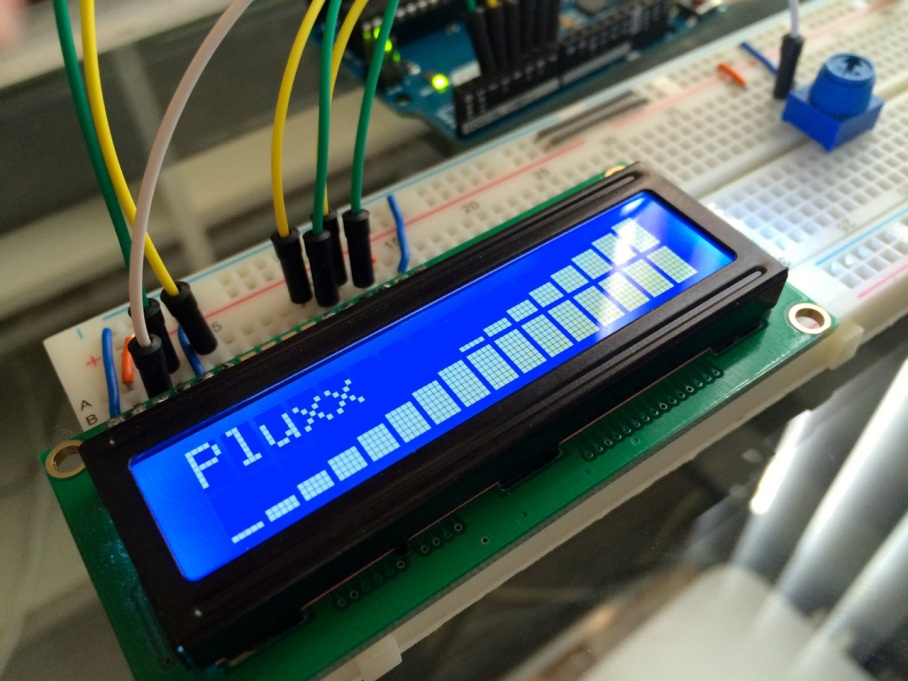 Provided you configure the contrast just right, this screen looks beautiful. I love the crisp white pixels on the deep blue
background. The viewing angle obviously isn’t as good as my OLED screen, but it’s better than I expected it to be. While a steep angle from most sides quickly results in inverted pixels, it’s very readable while sitting in front of the display, even at modest angles.

Viewing angle issues are pretty typical for LCDs, and can change depending on the manufacturer and fluid technology used. It’s something to keep in mind when using them in projects, especially if you expect you’ll need to view the screen from any unusual angles. It’s not something you’ll usually find details on when buying cheap displays from eBay, unless you’re lucky to find a listing that includes a datasheet. As an example, here you can see the side view of the same white/blue display as above, and a second green/black screen: 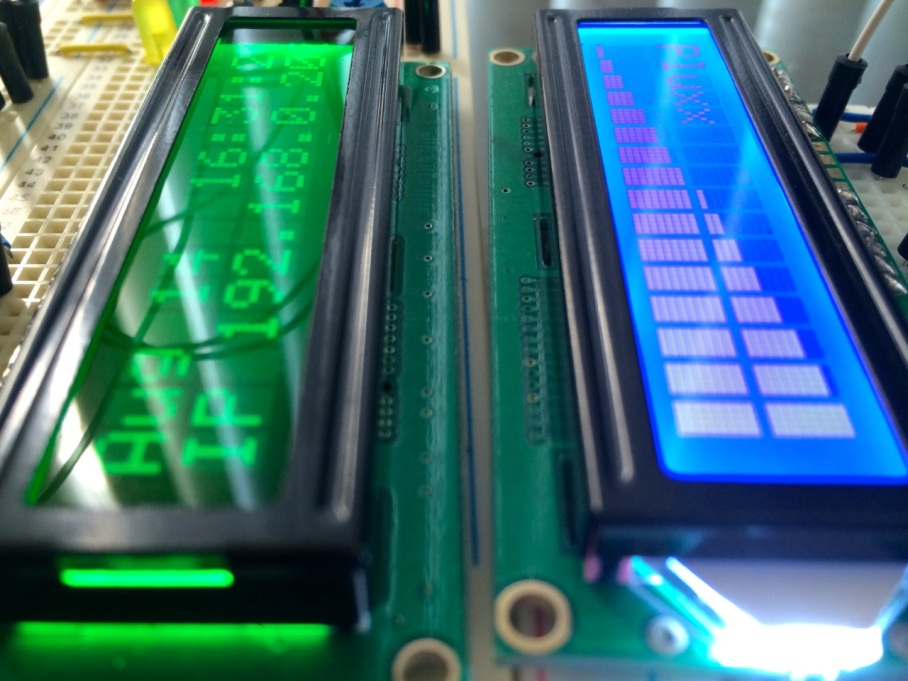 The white pixels on the right display start to turn rather dark at this angle, and the black background on the left display has turned bright green with the backlight bleeding through. For comparison, here is the green/black LCD viewed from straight above. Also, since this was one of the first modules I had ever used a soldering iron on, you may notice I could have probably used a bit more solder on those pins… And speaking of lessons learned, if you’re going to use your HD44780 compatible display in parallel mode, you may as well do it in 4-bit instead of 8-bit, and ignore those four pins in the middle. 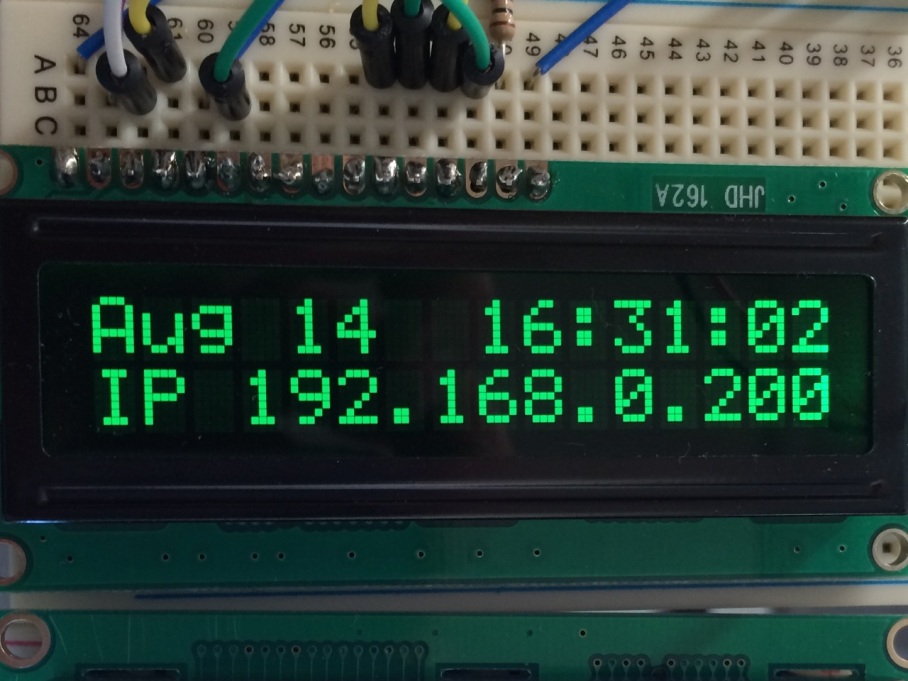 After trying out several different colored displays, I felt like I shouldn’t skip over the more common black/green LCD. A positive display type where the pixels forming the characters block the backlight, instead of letting it pass through. Since my LCDs so far were all 16×2, this time I wanted to try a nice big 20×4. 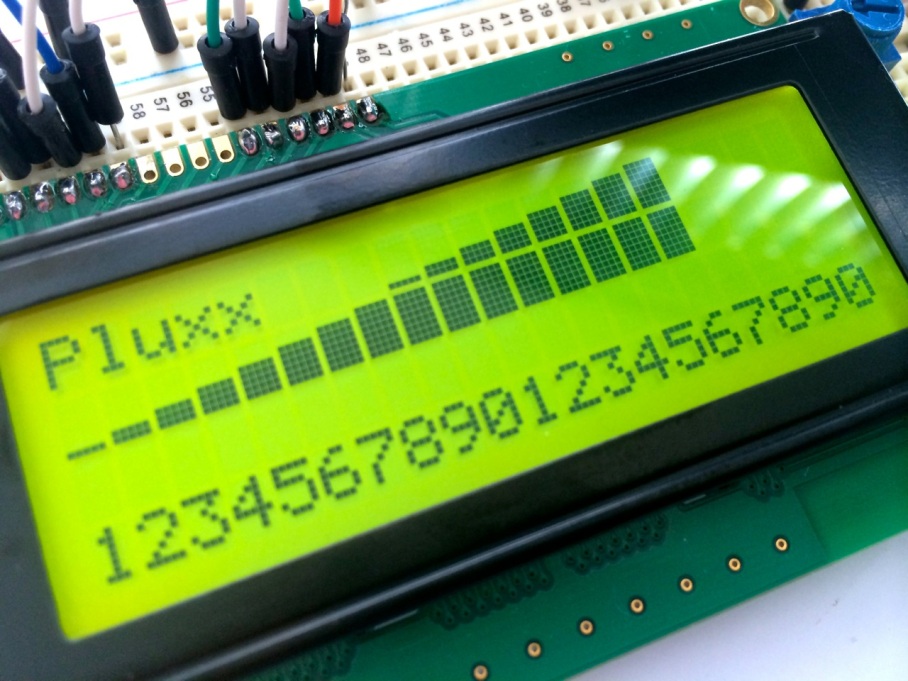 I’m quite happy with this screen’s viewing angle, if only the green didn’t look so dull compared to some of the flashier colors. Still, it seems the most readable of all the character LCDs so far, and I’m sure I will find it a good home in a project that requires a lot of text to be displayed.

One final display I’d like to share is a very recent addition, and my first full color screen – a 2.2″ 320×240 TFT display. Graphical displays are impossible to operate in parallel mode, unless you have a large amount of available pins, so I opted for one that supports SPI. 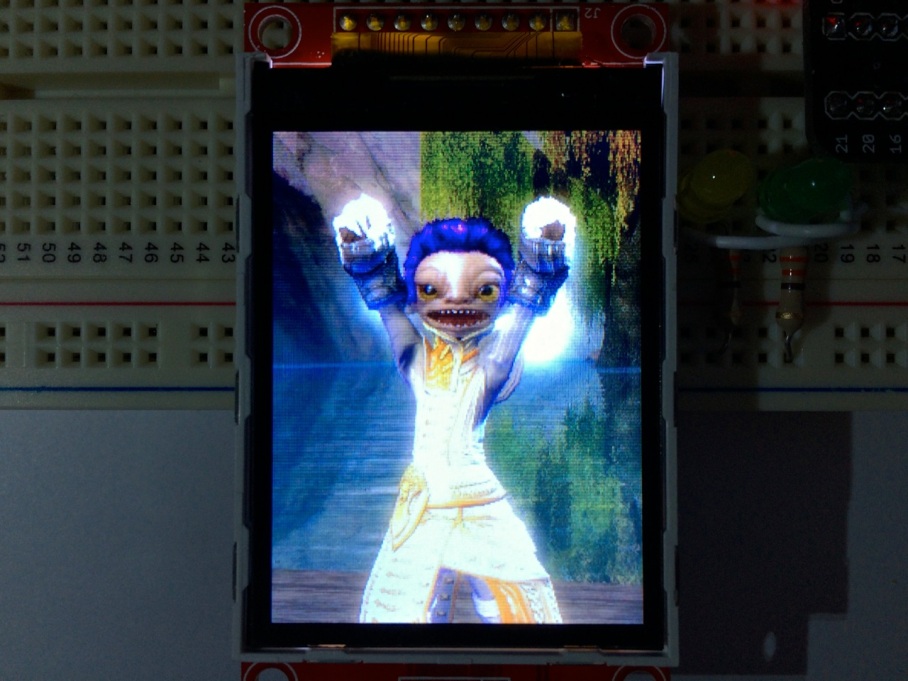 Make sure to be careful with the maximum backlight and logic voltage for these displays. They usually operate at 3.3V max and aren’t compatible with 5V, or only provide a 3.3V regulator for the LED backlight. Bad things will happen if you attach them directly to 5V. Bonus: Most of these modules come with an included SD card slot! 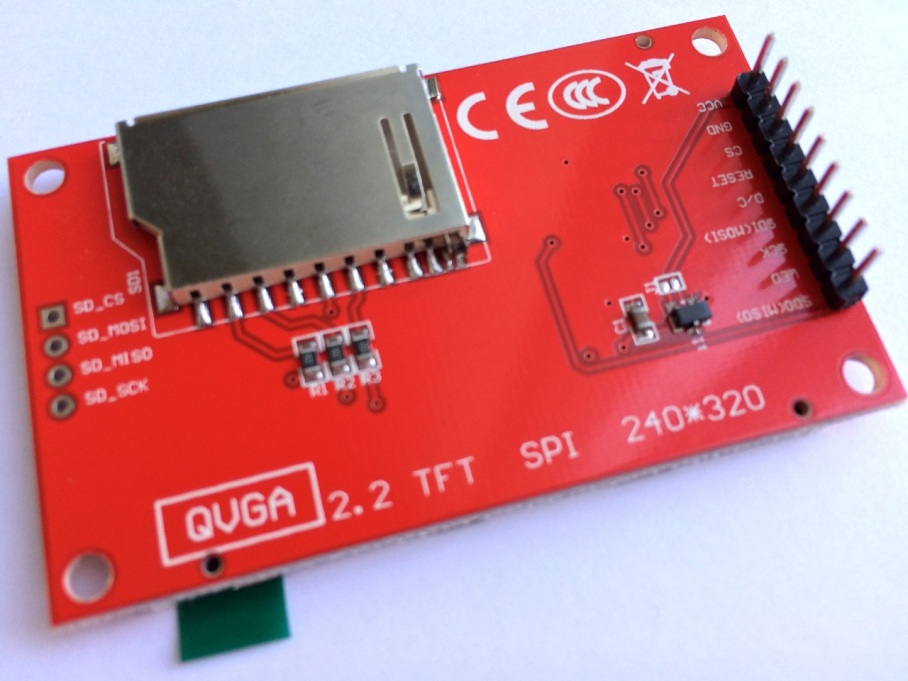 I still have a long way to go before my collection of LCDs is anywhere near complete, but I think I’ve made a good start. Next on my list is finding a decent graphical LCD. I’ve come across several blue and green backlit ones, but I wouldn’t mind trying out a more unusual configuration. I’m also missing a display with an RGB backlight. I bet those are fun to play with when controlling the color through software. I’ll definitely keep you posted on any new additions to my pile of displays.

3 thoughts on “My display obsession”