This is how it started. With a Raspberry Pi B+, a breadboard, and a handful of parts to play with.

For a while I’ve been looking for a low-cost, low-power mini PC to use for task scheduling and server monitoring. I needed something that didn’t take up a lot of room, wouldn’t rack up my electricity bill when powered on 24/7, and was quiet enough not to keep me up at night while running in my home office. I looked at various mini PCs, barebone PCs, Intel NUCs, even Mac Minis, but none of them fit my list of criteria.

Luckily, I came across an article promoting the Raspberry Pi model B, a creditcard sized mini Linux PC. Low power – leaving it powered on 24/7 for an entire year would cost me less than $10. Low cost – $35-$40! Definitely low noise – it’s fanless and has no moving parts. I’m very familiar with writing C/C++ applications for Linux, so that wasn’t an issue either. It seemed perfect for the job!

Trying not to act too impulsively, I decided to wait a bit before actually ordering one. That turned out to be a good thing, because a few days later rumors and leaks started to spread about a new B+ model. My eagerness to get this new toy, combined with stories about shortages during previous RPi releases, ended up with me staying up for most of the night before the expected launch day. I was probably one of the first people to order one from my local distributor at some ghastly hour on an early monday morning, hours before the official announcement was published.

I wasn’t particularly interested in this ‘GPIO’ port it offered, but I figured I might as well take advantage of it and order some extra parts to see if I could add some blinking LEDs to my server monitor. After all, a flashing red warning light when a server goes down is a lot more noticeable than a boring email reminder in my inbox.

My first clunky textbook attempt at hooking up the LEDs was a lot easier than I had expected electronics to be. I didn’t even have to solder anything! I used the colored LEDs as visual feedback for different events. Green flashes every time the servers are checked. Yellow flashes when my local internet connection is down. Red flashes when one or more servers is unreachable.

After getting this first project up and running, I wanted more, and went looking for other interesting parts. RGB LEDs, more switches, sensors, LCD displays! I would definitely need a soldering iron – I had never touched one before. An iron alone obviously wasn’t enough. Solder, solder wick, desoldering pump, soldering station, a sponge, brass wool, a ‘third hand’, possibly a magnifier. The list became rather long, and the cost added up for something I wasn’t even sure I would be half decent at.

And then the magic happened. I discovered the glorious world that is eBay and sellers based in China, Hong Kong and Thailand. So much cool stuff to play with, for such insanely low prices that I still can’t fathom how they can make a decent profit. It costs more to send a letter across town, than it does to get bags full of stuff from the other side of the globe. These bargain prices made it a lot more accessible to just order any part or module that caught my eye without worrying about wasting too much money.

I decided to still buy anything that could potentially be a safety hazard from local distributors – soldering iron, power supplies, etc. Any parts needed for permanent projects would also have to come from reputable places like Digi-Key, Mouser or Farnell. But cheap and interesting toys to experiment and prototype with? China! 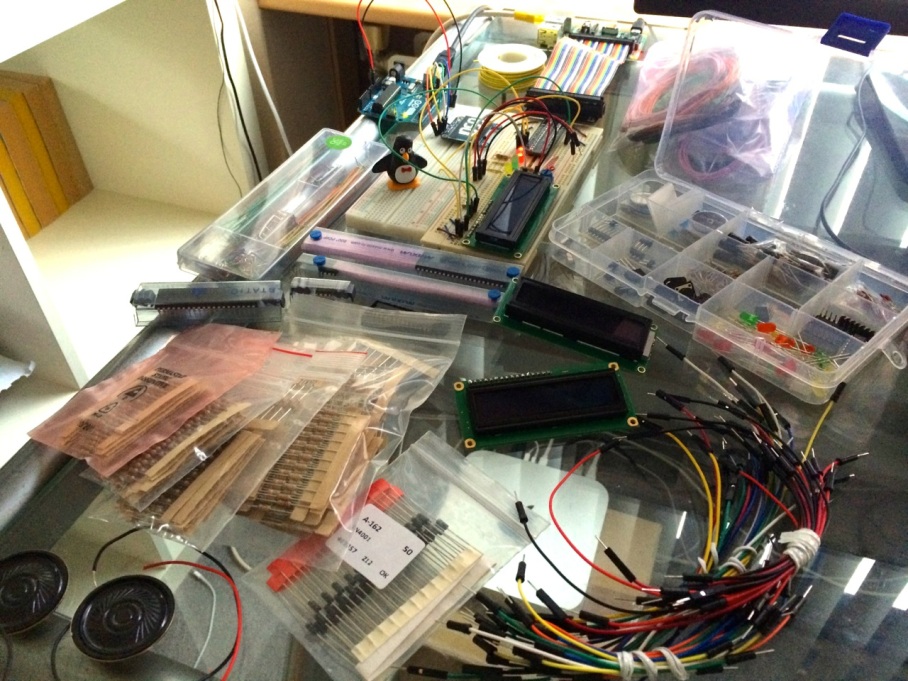 During the past few months I’ve learned how to solder, switched my focus to Arduino (AVR microcontrollers), and have started working on my second project (an alarm clock to replace my aging Sony one). I’ve also had lots of neat stuff shipped in, and took photos of everything. Rather than continuing to spam my friends with imgur links, having everything neatly organized on this blog seemed like a better option.

Over the coming weeks I’ll work on getting all of the stuff I have lying around posted on here with detailed descriptions and experiences. When I’m all caught up I’ll continue to post updates whenever I have project updates or interesting new electronic parts to share. I’m thinking about possibly starting a vlog at some point as well, but let’s stick to this for now.

Besides keeping everyone up to date on what I’m up to, I hope my blog will inspire those new to electronics engineering like I was just a few months ago, or motivate you to experiment with new or interesting components if you can already solder in your sleep.

2 thoughts on “Where it all began…”